The GOP is raising your taxes all over the US 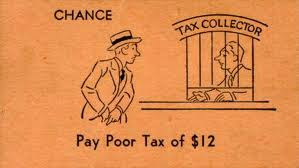 The latest round of billionaire-backed assaults on working people includes tax hikes for nearly everyone except -- you guessed it -- the very wealthy. Billionaires' manservants -- aka "Republican governors" -- are trying to raise taxes on the working class in Ohio, Louisiana, North Carolina, Oklahoma, Nebraska and Kansas. Only they're calling it the opposite of what it actually is. So when you hear a Republican governor use the words "tax reform," be very afraid.

Why? Because Kasich wants to cut taxes for the very wealthy by more than $10,000 a year. Policy Matters Ohio reports:

In Louisiana, Republican Gov. Bobby Jindal wants to raise taxes on the bottom 80 percent of people in the state. Why? Because he wants to pay for tax cuts for the top 1 percent. The Institute on Taxation and Economic Policy reports Jindal's proposal would raise taxes on the poorest Louisianans by an average of $395 and cut taxes for the very wealthy by an average of $25,423.

In Kansas, Republican Gov. Sam Brownback wants to make permanent a "temporary" sales tax increase of a penny. You know why. The poorest Kansans would pay an average of $22 more a year, and the richest 1 percent would pay $28,000 less, according to Citizens for Tax Justice.

In Michigan, Republican Gov. Rick Snyder's $1.4 billion tax increase of 2011 is just now hitting working families -- hard. The Associated Press reports that half of all Michigan taxpayers will pay considerably more this year:


Homeowners and renters used to qualify for a credit if their household income was no more than $82,650 a year. Now they don’t get it unless their total household resources are $50,000 or less and their home’s taxable value (roughly half the market value) is no more than $135,000.

The child deduction is gone. So are special exemptions for seniors and those getting at least half their income from unemployment checks.

We feel safe in assuming the American Legislative Exchange Council, or ALEC, is behind the tax hikes. Whenever you see state legislation that will empower corporations, enrich billionaires and wipe out the middle class, you can bet that ALEC is behind it. ALEC, the dating service for corporations and state lawmakers, peddles its copycat bills in every state capital in the country.

ALEC's devastating agenda is supported by an interlocking network of foundations and think tanks funded by billionaires. They call themselves "charities." When needed, they trot out Arthur Laffer to testify in statehouses on their behalf. They call him an "economist."

Never forget, up is down in the propaganda world created by greedy billionaires.
Posted by Teamster Power at 11:26 AM