Unions 101: How to explain and defend unions to anti-union jerks 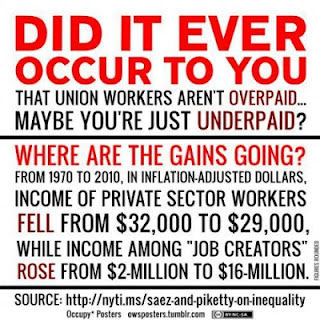 Our friends at American Rights at Work have a handy two-pager that explains what unions do. We condensed it a little bit. Keep it in your pocket and use it to argue with that biased relative at the dinner table.

Unions are democratic organizations whose leaders and rules are chosen by members.
A union is an organization of two or more employees who band together to bargain with their employer over hours, pay and working conditions.

Leaders are elected. Members draft and ratify constitutions that guide the union.

Unions represent all employees whether they pay dues or not.
Unions are required by law to represent the interests of all employees whether they pay union dues or not. They bargain with employers over contracts to establish pay, benefits and working conditions. They represent employees in disciplinary processes, lobby for laws that help working families and offer member benefits and fellowship. Union members help each other and their communities.

Unions are needed now more than ever.
If it weren't for unions, there would be no minimum wage, no eight-hour work day, no child labor laws, no health and safety standards, and no weekends. Extremist anti-worker politicians and powerful corporations are trying to roll back those standards and destroy Social Security and Medicare. Unions are the only group standing between them and workers.

No country has a middle class that doesn't have unions. Unions raise wages, benefits and standards for all workers in an industry.

Collective bargaining agreements typically contain a clause requiring an employer to show “just cause” for disciplining and/or firing an employee. They make sure employees have a due process to defend themselves against unfair accusations by an employer.

Bad trade deals, not unions, are hurting American companies.
Bad trade deals hurt the American auto industry by giving foreign competitors an unfair advantage over U.S.-made vehicles. For example, Toyota was near bankruptcy after World War II, but the U.S. government rescued it by buying military vehicles for the Korean War effort.

Some of the country’s most successful companies have a union workforce, including: Southwest Airlines, AT&T, Costco, and UPS.

Unions raise productivity on average by up to 24 percent in manufacturing, 16 percent in hospitals, and 38 percent in construction. Union workers also have higher professional standards because they train workers.

No worker is ever forced to join a union.
It has long been illegal to require and employee to join a union as a condition of employment. Workers may be charged a fee for union services even if they aren't members because unions are required to represent all employees and because employers are forbidden to discriminate against non-union members.

No Rights At Work laws let government interfere with the freedom of employers and workers to bargain with each other.
These laws force employers to treat all employees the same, and they force unions to represent all members. But they allow freeloaders to take advantage of unions by not paying for the services and benefits they receive. No Rights At Work laws are aimed at destroying unions and lowering workers' living standards.

Unions are always under attack by extremist CEOs and wealthy people.
The anti-union rhetoric you hear from extreme anti-worker politicians was bought and paid for by billionaires like the Koch brothers, Dick DeVos and the Wal-Mart heirs. They have a vast network of front groups, think tanks and paid media shills (like Glenn Beck) to smear unions.