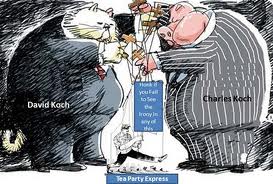 We stole that line from Thom Hartmann, who warns the billionaires


...don’t want the 21st Century to be “America’s Century.” They want it to be the “Billionaire’s Century.” And if they succeed, then the middle class in America - and through most of the developed world - will go extinct.

David Koch is the Benedict Arnold Koch brother who funds the phony tea party group Americans for Prosperity. AFP is busy this time of year trying to influence state legislatures, which are now in session. Koch's lobbyists are working hard to impoverish workers, eradicate public education, raise taxes on the poor, destroy unions, cut essential public services, get rid of public parks and pools, kill the clean energy industry (the Kochs are into oil and gas), let corporations harm consumers and loot the middle class and redistribute more money and power to the already rich and powerful.

Don't believe us? We got our hands on AFP's agenda for Arizona, which we suspect is very similar to their agenda in the other 49 states. Here's what they want to accomplish: