Stop No Rights At Work in Missouri! 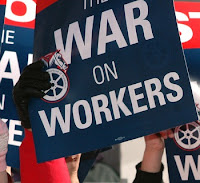 Extreme anti-worker lawmakers in Missouri say they're set to strike to pass No Rights At Work and paycheck deception bills.

Secret recordings reveal how these so-called representatives of the people are emboldened by greedy billionaires and CEOs. Their lackeys came to Jefferson City to promise campaign cash and plenty of  propaganda to give them cover.

Don't listen to the propaganda. Listen to what Michael Kuznetsov says about living in a No Rights At Work state:


As a Texas resident, I can tell you that you should all be very afraid of Right to Work laws! At every job I've had, we have to sign contracts acknowledging that employers in this state have the right to fire us for any reason or for no reason at all!

And listen to what Jim Kabell,  president of the Missouri-Kansas-Nebraska Conference of Teamsters, told Missourians, the Joplin Globe reported:


“This is long-term bad for Missouri workers,” Kabell said of the measure...

“It won’t be immediate and you won’t see wages drop off the table the day after, but the impact will be residual. At a time we are trying to move out of a recession, this would be a giant step backward and it will cost us jobs.”

We Are Missouri is asking all Missourians to call their legislators today and ask them to oppose No Rights At Work and paycheck deception bills.

Tell them to vote No on "right-to-work" and paycheck deception and focus on creating jobs, not taking jobs from the middle class.

You can also send a letter to the editor of your local paper with the help of a tool created by the AFL-CIO here.
Posted by Teamster Power at 10:47 AM