Meet the Teamsters behind the Oscars 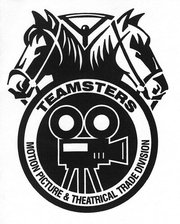 As you watch union actors, musicians and writers win Oscars tonight, don't forget they got plenty of help from Motion Picture Teamsters.

Brother Jake Kucera, a Teamster driver at US Foodservice, doesn't forget. He posted on the Teamsters Facebook page,


My son and I watch a movie till the end to see if it has the Teamster logo.

The Teamsters Union represents workers in the motion picture industry, including companies that produce feature films, television programs, commercials and live theatrical performances. Teamsters are drivers, wranglers, animal handlers, location managers, mechanics, dispatchers and casting directors. Location managers from Local 399 in Hollywood remind us how important the movie industry is to the local community in this video here.

Brother Matthew Sage worked on The Master, which received three Oscar nominations. He posted on Facebook:

12 years in... proud of my brotherhood! I was on THE MASTER for about 2 weeks. I believe it's up for something this year. I dig working on "period pieces ". All the actors walkin around set in costume, the sets...the craft service!

Brother Mike Davin from Local 249 in Pittsburgh tells us:

Brother Frank Gagliardo, now retired from Chicago Local 705, worked as an extra since 1992 -- starting with the movie Hoffa (which was nominated for two Oscars). Sister Becca Bernstein from Local 305 works on NBC's Grimm in Portland, Ore. Brother Geo Gordon from Local 407 in Cleveland is looking forward to Captain after working on Fun Size and Alex Cross.

Brother Lance Leis tells us he's been a movie Teamster since he was 19.

We ran Brother Lance through imdb.com and found he'd appeared as a driver or a transportation captain in about 30 films and television shows, including The Twilight Saga, Breaking Down Part I, Secretariat and The Killer Inside Me.

According to imdb, Brother Ian Bharath appeared as a driver in Safe, Be Kind Rewind, The Messenger and Factory Girl. Brother Donny Burdett got credits as a driver or transportation captain in more than 50 films, including three-time Academy Award winner The Curious Case of Benjamin Button.

We'll leave you with this thought from Brother Donald C. Stjohn from Local 399, who worked on too many films to list!


Unfortunately no Oscars for drivers. We're as disposable as any other below the line worker. Leo Reed has our back though and has done a great job with our collective bargaining and keeping us working. I'm proud to be a Teamster first. I enjoy working in Hollywood and meeting the people who make recorded history. 15 years with approximately 15 to go. Stay strong!

Posted by Teamster Power at 2:37 PM