Arthur Laffer, the worst economist in the US, is making a fool of himself 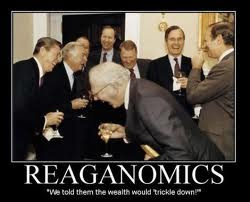 This is why Arthur Laffer is the worst economist in the country: Even economists who agree with him say Laffer is a laughingstock.

This is why you should care: Laffer's crackpot theories justify wiping out the middle class in every state capital in the U.S.

Laffer works with ALEC, the dating service that matches state lawmakers with corporate owners sponsors. Their aim is to promote policies that will (a) enrich CEOs and billionaires and (b) impoverish everyone else.

Right now, ALEC copycat bills are being introduced in YOUR state legislature to raise taxes on the working class, lower them for the rich, eradicate public education, abolish key public services and empower corporations.

Laffer's theories can be blamed for such disastrous privatization schemes as the sale of the Indiana Toll Road and the Lake Erie Correctional Institute in Ohio. Laffer's theories justify privatizing Pennsylvania's liquor business, cutting education in Maine and pulling the plug on high-speed rail in Wisconsin.

How does he get away with it? By putting out academic-sounding mumbo-jumbo that says, basically,  making people poor will make them rich. Don't be surprised: He's the one who said cutting taxes would result in more tax revenue, aka Reaganomics. He was spectacularly wrong.


Laffer is a clown, though one much beloved by his Republican friends because he tells them exactly what they want to hear, facts be damned. You know, if I found a doctor who told me I could lose 20 pounds by drinking beer and eating potato chips every day, hot damn I’d be all over that diet like white on rice. But I’m not a child. I’m a grown-up.

Apparently, Republicans are children. And hey, Arthur Laffer: if you have to make shit up to scare a legislative committee into believing your bullshit, maybe you should just hang it up.

Economist Lars Christensen actually agrees with Laffer on some things. But even he says Laffer is an embarrassment. Christensen points out just how Laffer makes shit up.

In his analysis Laffer compares the change in real GDP growth from 2006-2007 to 2008-2009 with the change in government spending in the same period in different OECD countries... Here is Laffer’s somewhat surprising conclusion:

“The four nations—Estonia, Ireland, the Slovak Republic and Finland—with the biggest stimulus programs had the steepest declines in growth.”

Are you joking Art?? Estonia? Biggest stimulus program? You can’t seriously think so. I think Prime Minister Ansip of Estonia would be rather upset that you say that his government apparently has conducted some kind of Keynesian fiscal stimulus. I know for a fact that Mr. Ansip has no respect for Keynesian fiscal stimulus. In fact his government has rightly been praised for its conservative fiscal stance.