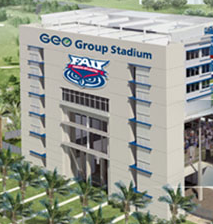 The news that Florida Atlantic University's football stadium would be named after a private prison company provoked quite a lot of criticism since the announcement on Tuesday.


Noor Fawzy, a political science student at FAU whose parents are Palestinian immigrants, is not so happy with the news.

“The fact that they are locking up people of color and immigrants like my parents is shameful,” said the 22-year-old, who is an elected member of the student government. “We don’t want our university to be associated with an entity that is being investigated for human rights abuses.”

Besides the United States, GEO Group also has private prisons in South Africa, the United Kingdom and Australia, where in 2003 it lost a contract after evidence was found that children detained in its facilities suffered cruel treatments, The New York Times reported in 2011. The company, which controls thousands of beds in private prisons and is worth almost $3 billion, is now in the middle of a multimillion-dollar lawsuit about mistreatment of prisoners.


GEO owns the Broward Transitional Center in Pompano Beach. The center, about 10 miles from the stadium, has recently been a center of controversy after people detained there complained about not getting proper care.


Libal said the GEO Group “poured enormous resources” in recent years into “attempting to take over a large portion of the Florida prison system.” He said the company’s usual practices included lobbying and charitable donations, often in areas where it operated facilities or planned to. To that end, this move could represent a way for the company to rebrand itself in Florida, he added.

“It’s startling to see a stadium will be named after them,” Libal said. “It’s like calling something Blackwater Stadium. This is a company whose record is marred by human rights abuses, by lawsuits, by unnecessary deaths of people in their custody and a whole series of incidents that really draw into question their ability to successfully manage a prison facility.”

You can sign a petition to demand that FAW reverse its decision here.
Posted by Teamster Power at 4:46 PM