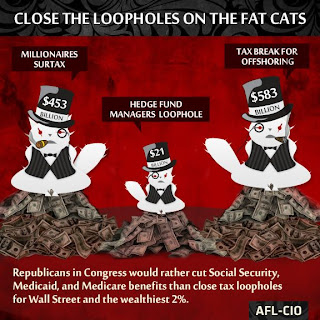 Economists (at least the non-Arthur Laffer sane ones) say cutting the budget will depress business activity and throw hundreds of thousands of people  out of work.

The Teamsters are urging members to call their representatives in Congress at 888-659-9491 today to tell them to have a heart:


Call your members of Congress today, and tell them to stand up to these bullies, reject benefit cuts for Social Security, Medicare and Medicaid, and cancel the across-the-board budget cuts under the sequester that would affect working families, such as cuts to food and workplace safety, education, and more. Instead, Congress should close loopholes for Wall Street and the richest 2%—especially loopholes that encourage job offshoring, allow corporations to pay no taxes, enrich the already wealthy, and bar the government from negotiating lower prices with drug companies.

The chart below shows what will happen if the automatic budget cuts scheduled for March 1 (under "sequestration") actually happen. 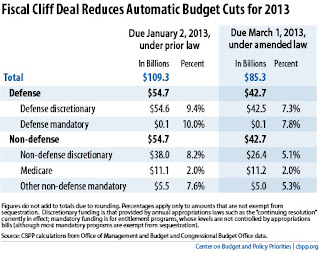