In Missouri, security for Limbaugh bust but not for workers 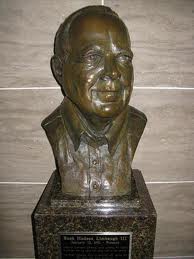 Missouri taxpayers are paying for round-the-clock security for a bust of Rush Limbaugh that sits in the Statehouse Rotunda.

This may strike you as a misplaced priority. So is this: The Missouri Senate is expected to vote soon on a bill to make it difficult for unions to collect membership dues.

And this: ALEC-backed lawmakers are trying to pass No Rights At Work. Reports the AFL-CIO Now blog,


Progress Missouri has taken a closer look at the bills and sees the fingerprints of the American Legislative Exchange Council (ALEC) all over them. At least 11 sponsors or co-sponsors of the various House and Senate bills have ties to ALEC and side-by-side comparisons of the bills to ALEC's model legislation border on plagiarism.

"Legislators need to be listening to ordinary people, not corporate special interests pushing an extreme agenda," said Sean Soendker Nicholson, Progress Missouri’s executive director. "The bills being pushed by ALEC put corporate profits ahead of the well being of average Americans. It's time to make sure that ordinary people—not corporate interests—are in charge of our government."

Votes on the anti-worker legislation weren't taken during this week's session, which was shortened by bad weather. In the meantime, the bust of a hate-radio jockey is safe and sound.


At the request of Republican lawmakers, taxpayers are funding a 24-hour security camera to watch over a Rush Limbaugh bust in the Missouri Capitol building.

State House Clerk Adam Crumbliss on Thursday told The Associated Press that he had authorized the $1,000 camera after Republican lawmakers expressed concerns about vandalism. Limbaugh's statue is the only one in the Rotunda with 24-hour security.

"We recognize that there was a level of controversy around it, and we want to make sure that property is protected," Crumbliss explained.

There are no video cameras watching over busts of Harry Truman, Walt Disney, Walter Conkite, Mark Twain and Stan Musial.

Posted by Teamster Power at 3:11 PM