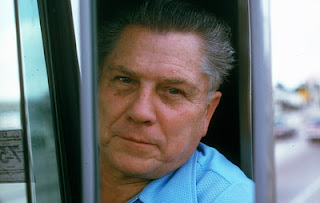 Today the International Brotherhood of Teamsters is honoring the legacy of James R. "Jimmy" Hoffa, who was born 100 years ago today in Brazil, Ind.

He dropped out of the 9th grade to help support his family. He was only 18 when he organized Kroger warehouse workers into the Teamsters union. Later he became an organizer for Local 299 in Detroit.

Hoffa rose through the ranks, and in 1937 he was elected Teamsters president. During his leadership, the Teamsters added 400,000 members. Hundreds of thousands of American families were lifted out of poverty because of his innovations such as multiemployer pension funds and national contracts. Hoffa also created the DRIVE (Democrat, Republican Independent Voter Education) Fund so members could decide how to support political candidates. His motto was, "If it moves, sign it up."

Watch a video tribute to the Teamsters' great leader here.

Many Teamsters today still remember him. We are sharing some of their comments and memories from the Teamsters Facebook page.

Brian Murphy
Thanks Jimmy! I'm enjoying a pension check every month because of men like you! Not the employers, my pension would go for the CEO's perks or profits to stockholders!

David A Guerrero
God bless u Mr Hoffa where ever you are and thank you for letting me be a TEAMSTER for life.

...my late Father was a lifetime Teamster out of Los Angeles and Tulsa. He met Jimmy Hoffa in the late 40s or early 50s. So in my house, it was Jesus Christ and Jimmy Hoffa, and not necessarily in that order! I saw how the Union worked for the workers and I learned early that a scab is one who reaps the hard work of the Union, when the Union has no need of scabs.

Mary Breen
2 thumbs up for the working class and the man who helped support them! Here's to you Teamsters and Jimmy Hoffa.

Kevin FitzGerald
...Even with his faults, problems.....he was an incredible leader, and took care of business, and his people. My favorite quote of his...." I have many faults, but being wrong ain't one of them", lol!!!

Carlos Borrero
A great and fearless leader who fought for rights of all the teamster this great country. Thank you Jimmy Hoffa.

James Sollee
My one regret after all my years as a Teamster is I never got to meet Jimmy Hoffa and personally thank him for the pay I recieved and the respect I recieved on the job. There will never be another like him. Local 79, Tampa, Florida

Ruben Brenhuag
thanks to him I was able to get a good wage and work my way to a great life for me and my family GOD bless him
Posted by Teamster Power at 3:59 PM