Hoosiers, your state rep needs to hear from you now! 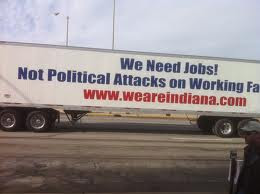 We just received this urgent message from our brothers and sisters at the Indiana AFL-CIO. You guessed it: Another anti-worker bill is being rammed through the Legislature:

Yesterday the House Education Committee amended House Bill 1334 to include language making it illegal for a school employer to honor an employee’s voluntary request to have their union dues deducted from his or her paycheck.   The bill does not impact the large number of other entities for which schools will remain able to deduct monies from paychecks – just labor unions.

This is about politics, not public policy.  The bill’s author admits that it’s not about costs and it’s clearly not about kids, or student performance.  It’s just another attack on workers’ and the unions that give them voice.  Only the Indiana Chamber of Commerce testified in support of the language regarding dues.  Many spoke in opposition.  It’s about politics, not public policy.

It has one purpose and one purpose only – to punish workers and weaken the unions that represent them.

When you hang up, send them an email too.  Make sure they hear you.  This bill is eligible for final passage in two days.  Act now!

In Solidarity,
The Indiana AFL-CIO