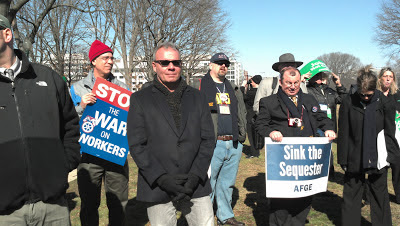 More than a thousand union members standing in the shadow of the Capitol today didn't just say no to the severe government cuts scheduled for March 1.

Cox's fear is that members of Congress, buoyed by greedy CEO lobbyists, will trim Social Security and Medicare benefits. Such cuts -- once unthinkable -- would replace automatic reductions scheduled for March 1 under so-called "sequestration." The sequester is the product of a manufactured budget crisis by radical Republicans in Congress. One of today's speakers called it a "guillotine."

Federal workers who spoke to the large crowd today painted a grim picture of locked Social Security offices and uninspected meat and dairy products. Signs read, "Sink the Sequester," "Hands off Social Security," and the ubiquitous "Stop the War on Workers."

Today's lunchtime rally took place just hours before President Obama's scheduled State of The Union speech. The action was part of a wave of protests and rallies planned around the country over the next few weeks. Tweeters are asked to use the #jobsnotcuts and #SOTU1U (SOTU1U=State of the union 1 union) hashtags during the speech.

Several dozen news conferences and rallies will be held on Valentine's Day. Fair Share will hold news conferences at broken bridges and schools from Boston to Roseville, Calif., pointing out how corporations get sweetheart tax deals. Housing advocates will deliver messages to members of Congress from coast to coast, asking them to have a heart. Working people are urged to call their representative on Feb. 14 to tell them to keep their hands off Social Security, Medicare and Medicaid.

A second wave of protests is planned for Wednesday, Feb. 20 by the National Committee to Preserve Social Security and Medicare, Health Care for America Now and the American Federation of Teachers. Keep your ears open for an action near you.

And for those who think government budget cuts are necessary -- though they will slow business activity and harm countless Americans -- we direct you to Sen. Sheldon Whitehouse. He's proposing reforms that will require corporations and billionaires to pay their fair share. According to the AFL-CIO Now blog:


We should make every effort to prevent this needless, self-inflicted harm. Many Republicans have said they want the sequester, as part of their clamor for "austerity." In Europe, countries that responded to the economic downturn by slashing their budgets suffered shrinking economies and persistent double-digit unemployment rates. But the failure of austerity in practice does not deter our Republican colleagues.

...Sen. Whitehouse’s proposals to close tax loopholes would generate more than $1 trillion in new revenue over 10 years—more than the $960 billion total amount of sequestration cuts. His proposals include:

Posted by Teamster Power at 2:37 PM