We'd like to welcome 10 new Teamster brothers and sisters who joined us in a sweet organizing victory in Wisconsin, where (as we're all painfully aware) government workers are under attack. They are all dispatchers who work for the beautiful and historic small town of Greendale, just west of Milwaukee.


I am proud to say that even in these difficult times here in Wisconsin we have managed to get a new group of ten dispatchers employed at the Village of Greendale this month. The group came to the Teamsters and asked if we would represent them because they were having problems with the association (Labor Association of Wisconsin) they were with at that time.Teamsters Local 200 met with them and explained the process and if they still wanted to move into the Teamsters we would gladly represent them. 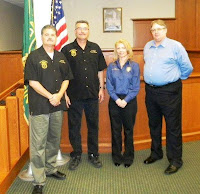 The vote was counted on May 4, 2011, with ten being eligible to vote eight voted to become Teamsters. The certification was finalized on May 16th from the Wisconsin Employment Relation Commission.