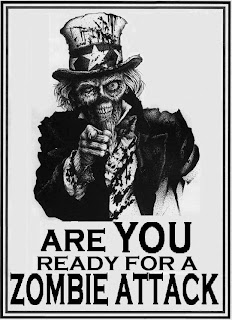 Rally Girl was quite taken by the news that the Centers for Disease Control has advice on battling zombie hordes, and offers up the following post:

The CDC recently announced how to prepare for and what to do in the event of a zombie-apocalypse, but the organization is too late. Our nation is already under attack by an army of the mindless, brain-hungry creatures. The reason for the outbreak? None other than David and Charles Koch.

Koch-whore zombies have been trying to do away with America’s middle class by ruthlessly devouring common sense. Their preference is brains that belong to those who are ignorant, apathetic and lazy.

In their unholy march, Koch-whore zombies have successfully begun ripping apart the American Dream. Their path of destruction is littered with the broken spirits of low-wage workers whose lives they destroyed. We saw the havoc they wrought on Wisconsin, Ohio and Indiana. And it isn’t over. They’re creeping into every neighborhood in every community of the United States, unless we do something to stop them.

The hard-working, dedicated, soulful people of this country are the last line of defense against the zombie-pocalypse. You can fight Koch-whore zombies and here’s how:

• Get educated—the best way to fight against zombies is to not become one yourself;

• Attend union meetings and spread the word that zombies are coming;

• Write a letter-to-the-editor thanking a public worker for their service—through public support of public workers, you have the power to turn ignorant brains into educated ones;

• Register to vote and cast your ballot for politicians who support labor—many of these same politicians have signed pledges to fight the zombie menace;

• Sign up for Teamster Take Action Alerts, which will keep you up to date on the latest movements of Koch-whore zombies;

• Write to a member of Congress and explain your concerns about the effect Koch-whore zombies are having on our country;

• Purchase Tom Morello’s new EP, Union Town—100 percent of the proceeds go to stopping the war on workers and ending the Koch-whore zombie-pocalypse;

• Pretend to be David Koch and call a governor.
Posted by Teamster Power at 12:49 PM