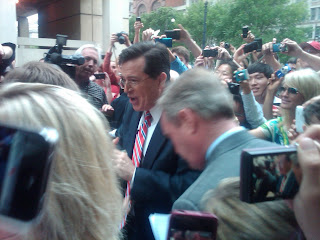 Stephen Colbert drew a large crowd and lots of excitement in Washington, D.C., yesterday, where he filed paperwork for his super PAC at the Federal Election Commission.

"I stand here on the same historic site where George Washington filed his independent expenditure-only papers," said Colbert, the satirical pundit host of the Colbert Report on Comedy Central.

In March, Colbert announced his plan to become a "political playa in 2012" by starting his own Political Action Committee called ColbertPAC. However, Comedy Central's corporate parent, Viacom, asked Colbert to cease his plans for fears that his PAC would violate campaign finance laws.

"What is a super PAC?" Colbert asked. "A PAC that got bitten by a radioactive lobbyist?"

After Colbert filed his paperwork and exited the FEC offices at 9th and E Streets, he told his audience that he would gladly shake hands for one dollar per person.