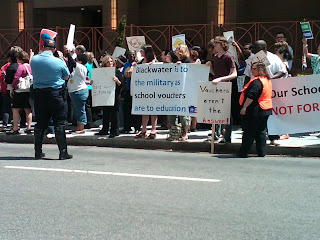 Koch whore Wisconsin Gov. Scott Walker cannot have been pleased by the reception he got in front of the Washington Marriott today. Nor can Chainsaw Pennsylvania Gov. Tom Corbett or Erasergate star Michelle  Rhee.

The energetic protesters in front of the hotel got plenty of press attention, which detracted from the message flogged by the three enemies of public education. It can't have helped that the protest helped expose the extremist billionaire backers of the voucher movement.

The program went off without a hitch. Parents, teachers and students were all heard.  It was well worth the effort for all those who traveled by plane from Wisconsin, by bus from Pennsylvania and on foot, Metro and cab from Washington to march and speak up for public education. 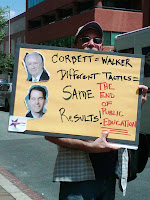 Here's a quick wrap up of the press coverage:


Protestors from Philadelphia, Bucks County and Harrisburgh made their way to Washington, D.C., this morning to protest at an education-related conference where Gov. Corbett was scheduled to speak.

About 200 demonstrators gathered shortly before noon outside the Washington Marriott Hotel, chanting "Save Our Schools," and holding signs, such as "Vouchers Aren't the Answer."..

Senate Bill 1, expected to come up for a vote soon, would "strip money from public schools," diverting hundreds of millions of dollars away from already hard-hit districts statewide...

Parent Tim Brown, waiting for the bus to D.C., said he saw vouchers as "cynical maneuvering" by "right-wing billionaires," who want to privatize all education in America.

"If they're complaining there's a budget problem, why are they turning around and subsidizing private schools," he asked. 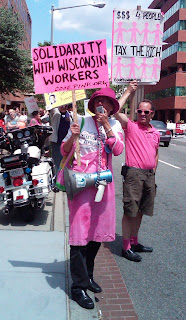 Politics PA got the message, reporting:


“The American Federation for Children (AFC),” said the groups in a joint media advisory, “is a group founded by the conservative DeVos family and a small core group of donors ideologically opposed to public education.”


“Walker and Corbett are carrying the water for DeVos and AFC, attacking teachers and students while gutting public education funding and silencing their voices.”

The Pennsylvania Democratic Party jumped on board with the criticism, forwarding news stories to the press about a recent poll showing that most Pennsylvania voters oppose school vouchers.

Salon also picked up on the fact that extremist billionaires are behind the push to eradicate public education:


The "American Federation for Children" -- a right-wing "education reform" organization founded and funded by religious right activist multimillionaire Betsy DeVos (former Republican candidate for governor of Michigan and sister of Blackwater founder Eirk Prince) and dedicated to electing state legislators who'll fund Christian schools with taxpayer money and crush public employees' unions -- is having a party in Washington, D.C., today, and they have invited Republican governors who have been working to fix education forever by firing all the greedy teachers and letting profit-seeking private interests manage the schools more "efficiently."

Wisconsin Gov. Scott Walker and Pennsylvania Gov. Tom Corbett are two of the honored guests of the Federation. The third, of course, is crusading former D.C. schools chancellor Michelle Rhee, movie star and hero of the Democratic elite. Rhee's address at the "policy summit" will probably not detail how to cover up evidence of widespread standardized test cheating, but it should.