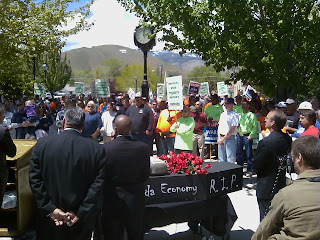 Teamsters rallied at the Statehouse in Carson City, Nev., yesterday to take a stand for workers’ rights. The rally drew about 500 construction workers and supporters from across the state. Teamsters from Local 631 in Las Vegas were there, having made the 450 mile trip by bus. Sister Almaraz with Local 631 reports:


The major issues we rallied around are prevailing wage and collective bargaining. Legislators want to cut public employee wages, repeal the minimum wage and push a lot of other proposals that will hurt working families. The rally was great because we made our voices heard.

Workers in Nevada are already suffering. The recession and housing slump have had a huge impact on the state. A recent article referred to Las Vegas as "the new Detroit." Last year, Nevada was one of the states with the largest drops in construction employment and reported its first population decline in 90 years.

The momentum of the Nevada protest continues with rallies over the weekend, including rallies in Florida and Michigan.

Go to our Stop the War on Workers site for more info on the latest events.
Posted by Teamster Power at 6:42 PM