NJ gov bails out American Dream -- the shopping mall, that is 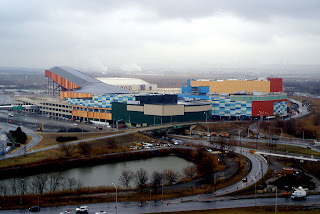 New Jersey needs good jobs and education funding. Instead, residents of the Garden State are getting another ugly mall.

The Xanadu Meadowlands complex, a monster retail and entertainment boondoggle, has been in the works since 2003. The tacky, multi-colored facility boasts an indoor water park and a 600-foot ski slope. Already, $1.9 billion has been spent on the project under the past three governors, and its development is back on under Gov. Chris Christie, as ThinkProgress reports:


"Though the Christie administration has criticized Xanadu, once calling it a 'failed business model,' and the governor said he was uncomfortable getting the state involved in private development, the state would provide $180 million to $200 million in low-interest financing and forfeit a similar amount in future sales-tax revenue. The administration has argued that the project is too big and too far along to let it lie fallow."

The real American Dream stood for something: that if you put in a hard day's work, you could expect good American wagers, benefits and a better life for your kids. It meant that when products were made in America, people knew they were getting the highest quality manufactured goods money could buy.

The real American Dream is what New Jersey residents would certainly prefer. Already, they've seen hundreds of millions of dollars in cuts to education funding, impacting some of the state's poorest communities. Christie wants to institute cuts that would quadruple public workers' health care costs. He has already cut funding for women's health programs, mental health services and more.

It looks like New Jersey will be getting the American Dream after all. Just the wrong one.
Posted by Teamster Power at 1:17 PM