Another Gov Gone Wild sinks in the polls

A new poll shows that Maine Wingnut Paul LePage is as unpopular as the rest of the Governors Gone Wild. 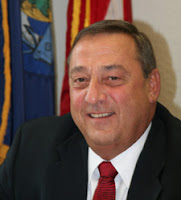 ﻿
The Kennebec Journal has the story:

In October, a similar poll by Pan Atlantic SMS Group showed that about 47.5 percent of voters had an unfavorable opinion of LePage and about 41.3 percent had a favorable opinion. About 11 percent said they were unsure.

You'll recall that LePage supported a right-to-work bill to destroy unions, which, fortunately seems to be going nowhere. He's the governor who won with 38 percent of the vote, then told the NAACP they "kiss my butt" because he wouldn't go to a Martin Luther King Day ceremony. He stirred further controversy when he said the only harm from the chemical bisphenol-A would be to cause some women to grow "little beards."

He also supports a roll back of child labor laws, which was thankfully rejected by the Legislature on Friday.

But his biggest gaffe was taking down a labor history mural at the Department of Labor while the 100th anniversary of the Triangle Shirtwaist Fire was being observed. The mural showed Rosie the Riveter at the Bath Iron Works, a 1937 shoe mill strike, child laborers and Frances Perkins, whose career as a labor advocate got started when she stood on the pavement and watched young immigrant women fling themselves from the burning Triangle Shirtwaist building.


About 65 percent of respondents said they disapprove of the governor's decision to remove the mural from the Department of Labor headquarters in Augusta. About 21 percent said they approve..

"Let's just deal with what needs to be dealt with right now, and that is jobs," said Carol Boden, 53, an independent from Bethel. "I am not seeing any movement toward generating jobs in this state. I've not seen any actions yet that I think are implementing job growth."