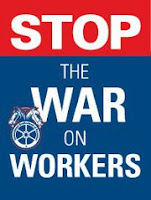 The Koch brothers aren't the only union-busting billionaires for whom Scott Walker prostitutes himself. He also does the bidding of the DeVos family,  the charming husband and wife team from Michigan that wants to destroy public education. (That's so their corporate buddies can run schools for profit.) The Devos "foundation," the American Federation for Children, actually gets money from the Koch brothers, so you know it can't be good.

There's good money in sucking up to the Devoses. According to The Nation, he American Federation for Children was a top donor to Scott Walker in the 2010 election campaign. Reports The Nation:


An ardent backer of Walker and his legislative agenda, the American Federation for Children "spent an estimated $820,000 on independent expenditures and phony issue ad activity in the 2010 fall legislative races,” according to the Wisconsin Democracy Campaign.

Guess who else the Devoses are supporting? The Republican senators in Wisconsin who voted to strip collective bargaining rights from government workers. Again, from the Nation:


The federation has emerged as a major player on the side of the six Republican senators who face recall efforts because of their support for Walker’s anti-labor legislation – just as they would certainly be big backers of any effort to protect the governor from recall.

They also paid for robo-calls to oppose the recall effort against the Republican senators. You can hear the robocall here.

If all this infuriates you, you can at least sign a petition here against privatizing education.
Posted by Teamster Power at 11:54 AM