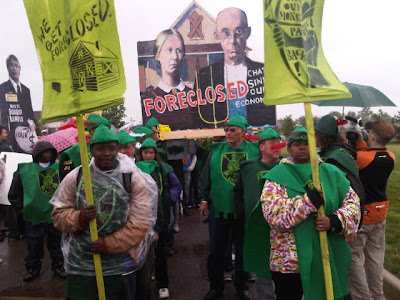 The Showdown in Ohio tells us that hundreds of workers, clergy and homeowners are rallying in Columbus against JPMorgan Chase because of the ginormous bank's predatory loan practices and eagerness to foreclose on homeowners.

The message: It's time to “Make Wall Street Pay."

According to "Showdown's" website, the hotel where JPMorgan held the meeting was surrounded by a moat. So protesters dressed as Robin Hood made a makeshift bridge and crossed the moat.


Shareholders trying to get into JPMorgan Chase & Co.'s annual meeting held Tuesday in this midwestern city were greeted by heavy security and over 400 protesters shouting slogans outside every entrance.

At least one person was handcuffed after a group of about 400 protestors marched up Chase's property and placed a sign on a raft floating in a pond in the bank's premises. The sign read: "Foreclosed: Chase sinks our economy."

Police had each entrance blocked ahead of the meeting, as protesters gathered in the rain and cold chanting slogans such as "Make Banks Pay" and carried signs that said: "Chase gets rich, we lose homes, jobs, services." At least 20 police cruisers circled the building.

Inside, several shareholders spoke out against the bank's handling of mortgage foreclosures.

"As a person of faith, my God believes you shouldn't take advantage of people when they are down," said Dawn Dannenbring of the community group Illinois People's Action, addressing CEO Jamie Dimon. "Do you believe in the same God I believe in?"

Dimon answered: "That's a hard one to answer."

In case you think working people don't have their protest on anymore, here's a snapshot of upcoming demonstrations, thanks to American Rights at Work:

WISCONSIN: We are WI Lobby Day and Press Event/Rally. Thursday, May 19 – 12:00 noon, Madison Capitol (King Street). If you are interested in participating in the We Are WI Lobby Day or sending a virtual lobby day email message, contact Kira Brenner at kira.brenner@gmail.com.
Posted by Teamster Power at 2:07 PM