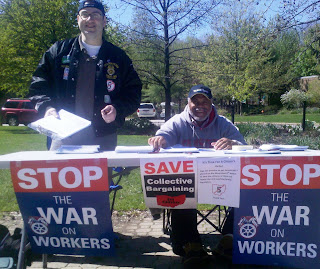 Ohio Teamsters are a big part of the massive effort to sign more than 231,149 names to petitions to repeal SB 5 in November.
Brother Fred Crow tells us they'll get 'er done. Ohioans are strongly opposed to the bill to strip government workers of their collective bargaining rights.
Local 436 in Valley View trained more than 60 of our brothers and sisters in one day. All told, thousands of people have been trained to circulate petitions. 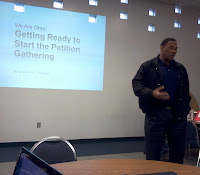 There are pleny of technicalities involved in getting valid signatures. Here leading a training session at Local 436's hall is Al Mixon, Local 507's principal officer and a Teamsters international vice president.
That was a few weeks ago. The signature gathering effort is in full swing right now. Yesterday, 3,000 people protested corporate stooge Ohio Gov. John Kasich's budget at the Statehouse. Reports the AFL-CIO,

They also used the event to gather signatures to put on the ballot a repeal of Kaisch’s Senate Bill 5 (S.B. 5) that eliminates collective bargaining rights for public employees.

Above is a photo of Local 507 Teamsters collecting signatures at the Cleveland Metroparks Zoo. They'd set up a table in a free speech area. The local represent the zookeepers.
Posted by Teamster Power at 3:59 PM