No, the unions didn't ruin Detroit 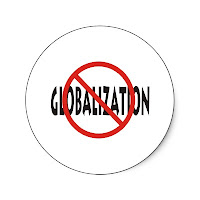 Globalization destroyed the Motor City, and a lot of other towns, too: Flint, Youngstown, Toledo, Benton Harbor, Gary, Rockford, to name just a few.

These were once thriving manufacturing centers. Not anymore. We've lost much of our auto industry to Mexico, which now sells us $42 billion more autos, trucks and automotive parts than we sell them. Mexico! Where do you think Mexico got its auto industry from? Can you say NAFTA?

The corporate and financial elite want you to believe that the high wages earned by union members are the reason American manufacturers can't compete in the global marketplace. They just hate it when they have to pay their workers living wages. That's why they pour hundreds of millions of dollars into think tanks, political committees, advertising campaigns and phony grass roots groups like the Tea Party. They spread their message through these groups because they want you to grab on to feel-good words like "freedom" and "opportunity." Then they want to scare you by waving their voodoo charm word "protectionism." Then they want to get another job-killing trade deal passed so they can cut your pay or, better yet, send your job to Malaysia.

Has anyone noticed that South Korea enjoyed tremendous economic growth since 1970 while its union membership grew by a whopping 239 percent? Michael Collins noticed over at the Economic Populist.  In a post titled, "Strong unions -- the worst nightmare of the financial elite," he writes,


A look at the growth in gross domestic product ... shows that the nation with the most powerful union movement, the Republic of Korea, had the most consistent growth in GDP since 1996.

Collins notes there are two powerful unions in S. Korea:


...the Korean Confederation of Trade Unions (KFTU) and somewhat larger Federation of Korean Trade Unions (FKTU). Both are in clear opposition to austerity programs and the labor disruptions caused by globalization and elitist contrived austerity programs. KFTU  is clear about its underlying philosophy. The organization opposes "the uncontrolled rampage of globalisation, which is threatening to reduce systems of social justice and economic democracy to shambles."

The Korean unions want the job-killing trade deal that's coming to Congress soon about as much as we do. That is to say, not at all.

It would be nice if our leaders listened to the people who make economies strong, instead of the financial elites who simply want to plunder what's left.
Posted by Teamster Power at 1:44 PM