More anti-Walker protests as he sinks in polls 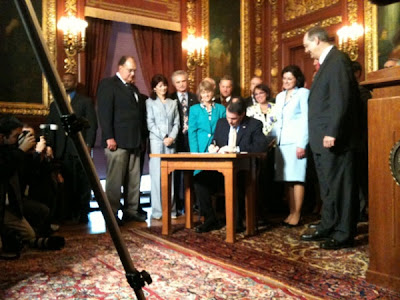 In a bald (note photo) power grab, Walker signed a voter-ID bill that will make it harder for students, minorities, the disabled, the elderly and the homeless to vote. Now, Wisconsinites must produce a photo ID with an expiration date on it (something University of Wisconsin IDs don't have) if they want to vote to recall him once he becomes eligible on Jan. 3, 2012.

Which they will, because polls show Walker is more unpopular than ever. A new poll by Public Policy Polling shows 43 percent of Wisconsinites approve of the job he's doing while 54 percent disapprove -- a drop from the 46-52 he scored previously. According to Dean Debnam, president of PPP,


He’d be done if the vote was today, it’s just a question of whether that desire to put him out can
continue to be sustained in the coming months.

We suspect that recall fever won't abate any time soon in Wisconsin, as Walker will continue to attack the middle class. Plus, the July 12 (and beyond) recall elections will stoke the flames. PPP reports that potential challengers to Walker -- former U.S. Sen. Russ Feingold and Milwaukee Mayor Tom Barrett -- would croak him if the recall election were held today.

But back to the protests: We'll let the tweetosphere describe it:
@analieseeicher: Still going strong w/umbrellas and noisemakers! Those w/umbrellas sharing w/ those w/o them.
@news3jessica: loud outside Gov rm for #VoterID bill signing. Protesters yelling "shame" at lawmakers.
@jvanegeren Crowds chanting "recall Walker" outside his office where he will sign voter ID bill at 12:30
@millbot: Appropriate that Walker signs bill to disenfranchise voters on such a gray, rainy day.
@MSpicuzzaWSJ: Chanting protesters gather outside WI gov's conference room as he signs #voterID into law.
@tiffanybrault: I'm completely soaked from chanting outside the Capitol, but one day longer, one day stronger.
@SnufkinsHat: Excellent hallway rally outside the Gov.'s office, but he left by a side door. Sure are a lot of secret passages here.
Posted by Teamster Power at 2:49 PM