CT Teamsters get something going at May Day rally 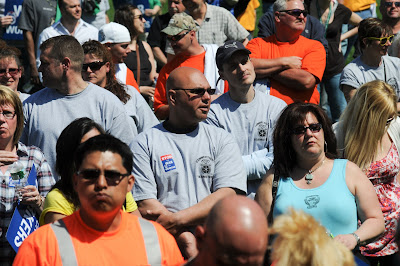 Teamsters came out in force for a May Day rally in Hartford.
UPDATE: Added Locals 677 from Waterbury and Local 191 from Bridgeport.

From the Better Late than Never Department:
We've just learned details about a terrific May Day rally in Hartford, Ct., that got people educated and fired up about the War on Workers.

Teamsters were by far the largest contingent at the rally, which drew 2,000 people near the Statehouse on a beautiful spring day.


It can come up on you any time. We gotta be ready for it and send a message: “Don't bring that crap here.”

Connecticut Teamsters came from Locals 493 in New London, Local 1150 in Stratford, Local 677 in Waterbury, Local 191 in Bridgeport and Local 671 in Bloomfield. Joint Council 10 from New England brought four or five carloads of Teamsters (along with the Teamsters truck). Teamsters drove all the way from Local 633 in Manchester, N.H., Local 10 in Boston and Local 40 from Mansfield, Ohio.

Local 671 gave “Stop the War on Workers’ t-shirts to members and sold them to others at cost. The t-shirts were gone by the end of the day.

Lucas said he was pleased to see members from his local that he never expected to see.


We really beat the bushes to get them to go, to get them aware, and it really worked. This took on a meaning. We got something going.

It really built the people up.

The Day reported on the rally, noting that budget shortfalls in Connecticut meant government workers were being asked to make concessions.


Gov. Dannel P. Malloy was invited to attend but was out-of-state.

The first-term Democrat governor is on the opposite side of the bargaining table with unions representing more than 40,0000 state employees. The Malloy administration is seeking $1 billion in annual savings and givebacks from state employees to help plug a $3.4 billion budget hole in the next fiscal year... 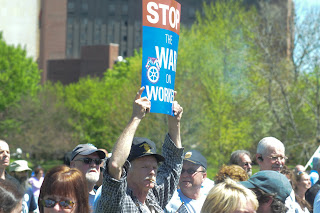 James Findley, a state union worker, held aloft a sign asking “Sacrifice Shared by Whom?” The message was a reference to Malloy’s calls for “Shared Sacrifice” among Connecticut residents in mending the state’s finances.

The 47-year-old Storrs resident said that because the wealthy experienced greater gains than the middle class in recent years, the state needs a more progressive tax structure than what is in Malloy’s budget, which would raise the top income tax rate to 6.7 percent.

“He’s asking for an extraordinarily large contribution to be made by the unions and I would just like there to be a little more shared sacrifice from those who have benefitted over the past 10 years,” he said.

Posted by Teamster Power at 2:29 PM