A warm welcome to 105 new Teamsters in Lincoln Park, N.J. They are First Student school bus workers who voted by a margin of nearly 2-to-1 to join Local 102 in Springfield, N.J. All are looking to improve their lives by standing together to bargain with the company.

Henry Johnson, a monitor who's been with First Student since 2009, said,

Currently we don’t get a single holiday and no one gets any sick pay. If you don’t work, you don’t get paid and that’s not fair. With our Teamster contract, management will have to follow the rules and the workers will finally have some say. It’s going to be a lot better. 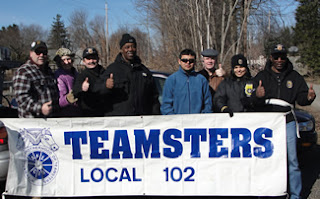 We welcome these drivers into the Teamster family and look forward to working with them in the future.

For more information, go to http://www.schoolbusworkersunited.org/
Posted by Teamster Power at 10:02 AM