LA March for Jobs swells as UK March26 winds down 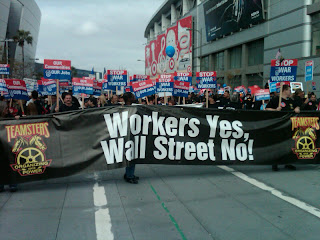 Call it "Solidarity Saturday" as workers march nonviolently in multiple time zones today.  In Wisconson, workers are collecting signatures to recall Republican senators who voted to strip government workers of their collective bargaining rights. In London, many of the 500,000 marchers -- who call themselves "The Big Society" -- are heading home or into the pubs. There they make the complaints we're all so familiar with: biased news coverage. 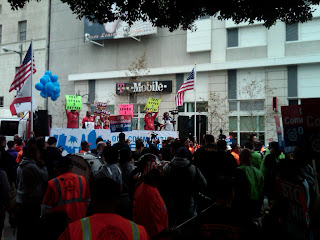 In Los Angeles, the massive crowd has just left the Luxe Hotel, where HERE is trying to help workers, and heading to T-Mobile, where CWA is calling on management to stop attacking workers' right to organize. Other unions, including the UAW and the Laborers have joined in.

The theme is the same everywhere: Large corporations have too much power and workers have too little. It's time to fix the balance. 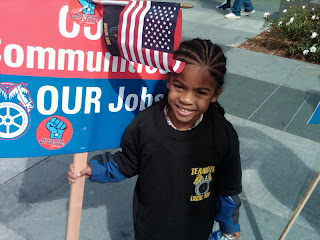 In London, they're protesting massive cuts to public services. That's starting to happen here at the state level and soon at the federal level. We're all mad as hell because the banks caused the economic crisis, workers are bearing the brunt of it and large, tax-evading corporations aren't creating jobs.

The protests of 2011 are family friendly, and the presence of children reminds us that the future is what's at stake.
Posted by Teamster Power at 2:36 PM