A vibrant protest outside headquarters of lobbying firm BGR, the site of a $1,000-a-head corporate fundraiser for GOP Wisconsin lawmakers, turned into a monster rally when Teamsters and other union members, concerned citizens and community activists stormed the building. The rally, which drew thousands—some directly off the street—took place in the center of Washington, D.C., yesterday at rush hour.

With bells, whistles, soda cans filled with rocks, drums, signs and voices, thousands flooded past security guards into the marble lobby chanting “Shame! Shame!” in an act of solidarity that sent goose bumps down those present and gave a message to corporate-backed politicians that their days in office are numbered.

When a large banner that read “Respect Workers’ Rights” was unfurled at the foot of a statue, the crowd went wild. The energy remained high as protestors exulted, singing chants of democracy and solidarity. 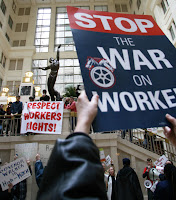 Nearly an hour after occupying the building, protestors left the lobby for the streets. Numbers were so great that D.C. police had no choice but to block off intersections, giving the people free rein of the block in front of BGR headquarters. Drum circles were started as ralliers celebrated, all while directing their attention at the corporate stooges inside.
The voices of protestors singing, “What does Democracy look like? This is what Democracy looks like!” could be heard for blocks and blocks.

But ralliers couldn’t be contained by just one street. Not long after they filed peacfully out of the building, protesters marched through D.C. Police once again acted quickly, blocking off intersections and rerouting traffic to ensure protestors remained safe. The high-energy, peaceful parade made a stop at the White House before continuing on to the U.S. Chamber of Commerce.
Ralliers eventually made their way back to the BGR headquarters, where many of them stayed until late into the evening.

Salon offers this video of the protest.
Posted by Teamster Power at 10:58 AM