'What's happening now is what happened in Memphis' 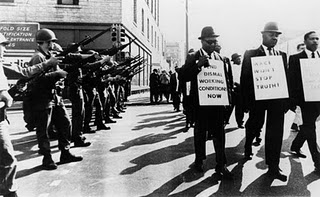 April 4, 2011, will mark the anniversary of Dr. Martin Luther King, Jr.'s, death in 1968 and the birth of a new civil rights movement. Unions will be joined in a day of action by student, faith, civil rights and human rights groups. In anticipation of the event, we talked about the current War on Workers with a leader in the Memphis sanitation workers' strike of 1968: Alvin Turner.

Alvin Turner started working for the City of Memphis at age 16 and often held two jobs just to get by. In 1968, Turner was 34 years old and married with four children. Now 76, a scar he still bears on his head reminds him of being clubbed by a Memphis police officer during the strike.
Turner said if it weren’t for his age and frail health, he would be standing shoulder-to-shoulder with public workers in Wisconsin.


Seeing what’s happening in Wisconsin and around the country—it takes me right back to the same fight. What’s happening now is what happened in Memphis. They want to take back what we fought so hard for. It really hurts me to see this.

They stopped negotiating with us. They told us they’ll talk when we go back to work. That’s when we decided to call in Dr. King. When Dr. King came down, it brought the strike to everyone’s attention. There were poor people all over the U.S. and King wanted to see a chicken in everyone’s pot. We wouldn’t have won the strike if it wasn’t for Dr. King. He said ‘I’m not moving’ and we followed what he said.

Our strike started out as a labor strike, but two weeks in it became more than just a strike. It became a civil rights movement.

Like many fighting today, Turner knew he had to stand up for not only for himself, but for his family.

Today, all of Turner’s children are successful in their careers. His eldest daughter is retired from the Navy. His second daughter works in Atlanta, Ga. His third daughter has a doctorate’s degree and his son is a teacher at a high school in Memphis. Turner’s son Russell shared this story about his youth:


I remember when I was in college and there was a job opening at a sanitation department. They were offering $12 an hour, which, for a college student, is a lot of money. I applied for the job and when I didn’t get it, I called my dad to tell him. Dad said, ‘I was a garbage man so you wouldn’t have to be.’

Russell Turner is now a high-school teacher in Memphis, Tenn. Today, Tennessee’s Legislature is considering a bill to strip public school teachers of their collective bargaining rights. Thousands of teachers and their supporters have protested the bill at the state Capitol in Nashville.

Turner offers words of solidarity and hope to those fighting for collective bargaining rights today.


It takes more than just paying union dues to be in a union. You have to attend meetings and get involved. I want to tell people to day don’t give up. Hang in there. I just wish I could be with you.