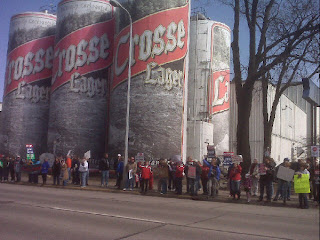 Looks like an energetic anti-Koch whore Walker crowd showed up on short notice in LaCrosse this afternoon. They weren't even sure when he'd be there. ﻿Walker was to tour the City Brewery, and we understand there was no public notice of his visit. People just showed up hoping he'd arrive when they were there.
We'll learn more later from our Brother Rob Moss, business agent for local 695. He's busy protesting right now. Right now we're relying on @emd10s tweets and tweetpics. Here's what we learned: 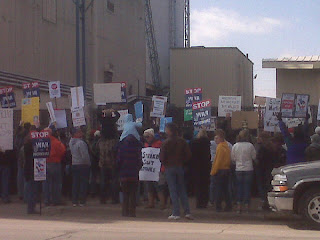 Meanwhile, even a Fox News poll shows the public is on our side. Though Fox tried to spin the results differently, here's what the nationwide poll says:

Over two-thirds say states should allow public employees to negotiate over wages (69%) and pensions (68%).

And here's an amazing result. Even though the question was designed to get the result that "these debates are better described as serious attempts to address budget deficits," a plurality gave the answer Fox didn't want:


44% say these debates are better described as "political attacks to try to kill unions," with 38% saying they're "serious attempts to address budget deficits."