A ray of hope in NH? 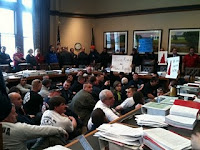 New Hampshire, the Live Free or Die state, has a strain of right-wing wackiness that occasionally takes over. It did in last November's election. The Republican wave swept in 91-year-old Marty Harty, who then told a constituent that defective people should be sent to Siberia. Harty's comments harken back to the days of Gov. Mel Thomson, who once suggested arming the National Guard with nuclear weapons.

In the spirit of Mel Thomson and Marty Harty, the New Hampshire House is set to vote on a cruel anti-worker bill. It has been aptly called "Wisconsin on steroids." The bill would destroy the state's government unions when their contracts expire by automatically making their members "at-will" employees.

Concord erupted last week when the House Finance Committee voted to add the provision to the budget. Protesting union members jammed the hearing room and refused to leave. Reports the Concord Monitor,


...The vote was met by jeers and chants from the activists who spilled out of the House Finance Committee hearing room, down the stairs and outside the Legislative Office Building.

Though New Hampshire's House and Senate are both lopsidedly Republican, the budget as it stands may not pass the Senate. The Senate President, Milford Republican Peter Bragdon, told WMUR the provision should at least have had a hearing.


During a taping of WMUR-TV's "Close Up" political show Friday, Senate President Peter Bragdon said a provision in the House budget plan strongly opposed by unions may doom the bill in the Senate.

"In all honesty, I have not talked to a single senator who will vote for the budget with that provision in it," Bragdon said.

Now, you have to be careful with politicians. That may simply mean that Bragdon hasn't talked to a single senator about anything since the anti-worker amendment passed the committee. But it could also mean the bill won't pass the Senate.

Here's more good news: Marty Harty retired once his comments made the national news.
Posted by Teamster Power at 8:27 AM