An economy that works for the well off 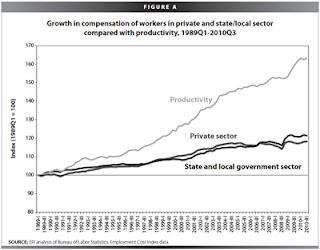 State budget woes were caused by government workers, if you listen to greedy CEOs and their political stooges (which we strongly advise against). Events in Wisconsin demonstrate how the plutocracy is pitting public workers against private-sector workers in an attempt to divide, conquer and destroy workers' rights.

The truth is that anti-worker legislation like the Wisconsin “budget repair bill,” isn’t about balancing the budget. It’s about stripping workers of their rights to collectively bargain -- in other words, to have a say in their future. Here’s another truth: public and private-sector workers are both suffering.  The Economic Policy Institute recently came out with a study of wage trends in America and found:


Neither private-sector workers nor state and local government employees have seen their pay rise much over the last two decades, and what meager pay growth they have experienced has been far outpaced by growth in productivity—the increased goods and services that they themselves have generated.

So, workers are working harder than ever, producing more, and yet receiving less. Who is reaping all the rewards? EPI asks:


Why has pay fared so poorly overall? Why did the richest 1% of Americans receive 56% of all the income growth between 1989 and 2007, before the recession began (compared with 16% going to the bottom 90% of households)?

Good questions. So, why is all the money going to the already-rich? Says EPI,