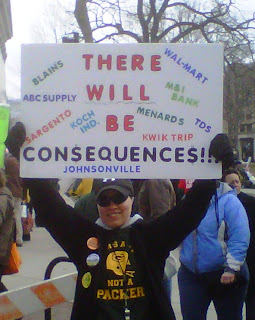 If you’re a Wisconsin voter, you must check out this important information on how to recall eight of the Republican senators who voted to end collective bargaining rights for public workers. These senators can be recalled right now. Since elected officials have to be in office for one year in order to be recalled, we’ll have to wait a little longer to recall Koch whore Gov. Scott Walker, but the countdown clock on our website is ticking (291 days, 9 hours).

The recall efforts are going strong, with The Hill reporting:

The petition drives are certainly going well. The Wisconsin Democratic Party announced Monday that in just two weeks, it had collected 45 percent of the signatures required to force the recall election in those eight Republican districts. Democrats have eight weeks to gather the necessary signatures.

While the recall efforts are going well, it’s not a done deal until it’s done. There are still more signatures to be collected, which is why it’s so important for Wisconsin voters who haven’t already signed a recall petition to do so. And the Republicans will have plenty of corporate money to run attack ads; two of them (Darling and Grothmann) are in Washington, D.C., tonight vacuuming up cash from a lobbying firm. (Teamsters will be there to protest.)

In the 18th (Oshkosh, Fond du Lac and surroundings), Republican incumbent Randy Hopper faces a 44-49 deficit against a generic Democrat. Polling by SurveyUSA last week paints an even direr picture for Hopper — trailing 43-54.

Regular readers of this blog will recall Sen. Hopper, who has apparently been living with his 25-year-old mistress. This news led to a complaint with the attorney general’s office that he hasn’t been living in his district.

Wherever Hopper is living, there is likely an AFSCME shirt in his closet. He wore one last year at a lobby day where he posed for pictures with AFSCME union members/constituents. This was before he voted to end their collective bargaining rights.

The recall is on.
Posted by Teamster Power at 4:27 PM