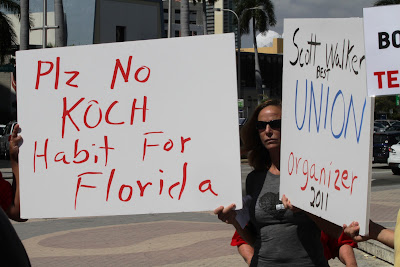 Rick Scott should have gone to jail.

He was CEO of a hospital company that paid the largest fine in history -- $1.7 billion -- for Medicare fraud. The Miami Herald reminds us:

Instead, Rick Scott was elected governor of Florida. Now he's making an all-out attack on Florida's teachers. He's telling state nurses and firefighters they are subject to random drug testing. And he wants to get rid of high school football.

Rally Girl brings us this report from the ground in Tampa:


Steven Mueller is a shop steward for Local 79 in Tampa and an employee of the Collier County School district. He joined other Teamsters and community members at a rally in Naples, Fla. to protest Gov. Rick Scott’s anti-union legislation on Tuesday, March 22.
Mueller said standing up to corporate greed is about protecting the future and fighting for the middle class.


This is about our future. We have to stand up for our rights—no one else can do it for us. These things are going to affect future generations. If we don’t try to stop it now, the results could be devastating.

Scott isn’t even telling us, the people, the details of his proposed legislation. He’s never addressed the public sector employees about this. He goes to private sector industry and tells them about it. He’s catering to the rich.

We need to stay strong and we need to stick together because what affects one affects all. If you aren’t mad, then you’ve been sleeping under a rock and clearly don’t know what’s going on.

Stay tuned for more from Mueller. Rallies are scheduled every Tuesday in Florida and Mueller plan to attend as many of them as he can.

Posted by Teamster Power at 2:01 PM