There are still plenty of marchers at JP Morgan/Chase. SEIU is leading the action against the too-big-to-fail bank, which laid off janitors who apparently weren't too big too fail.


At 9th and Hope. Everyone chanting Hoffa and Teamsters. 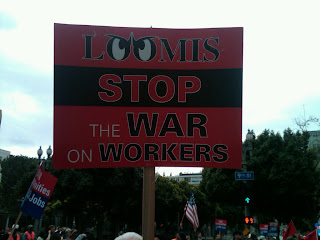 Tens of thousands of union brothers and sisters had stopped at armored car company Loomis, where Teamsters are fighting to join other Teamsters.

The marchers came from Ralphs, a grocery chain. UFCW led chants for the company to agree to a contract with employees.


We're seeing tweets from supportive Angelenos watching from their buildings, such as this one from @iAMCripe:


Teamsters rally outside our window. Supportive but oh so #hungover.

At the end of the march, @LALabor tells us Tom Morello: the Nightwatchman to play "Union Song." (You may remember Morello, whose mother was a school teacher, played in Madison, Wisc., for the protesters there.) The hip hop group Ozomatli will also perform.
Posted by Teamster Power at 3:21 PM