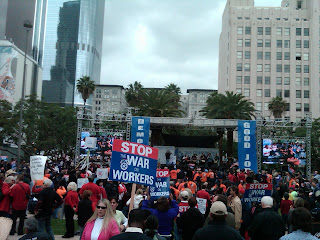 As the half-mile march converged on Pershing Square in Los Angeles, Teamsters kept order among the crowd. Just then we received this message from @Spudlovr in Wisconsin:

Jim Hoffa has taken the stage, and led thousands in the chant, "Hell no, we won't go."


They've introduced right to work in 13 states but we are energized. This is a wake-up call because it might be a teacher in Wisconsin, they might think we are next, but hell no we won't go. We saw Ohio and Wisconsin, but today they saw the great face of America.

Joe Fernandez, a steward for Local 63 at UPS Freight in Commerce, Calif., said he was at the rally to send the millionaires a message.


I'm here to support all working-class people and all the unions that represent them. My message to the rich is: "If we are making you wealthy, you need to share the wealth with the workers who are making you wealthy. I don't want to see more of a part-time America where people work two or three jobs with no benefits."


LAUSD teachers out here fighting for their jobs!! LIUNA..Teamsters..Firefighters..SEIU..UFCW..CWA..STUDENTS!! #iloveUNIONS

Meanwhile, across the continent, protesters rallied against Bank of America. USUncut, a grassroots organization modeled after UKUncut (which rallied in London today), explains:


Bank of America received $45 billion in government bailout funds while funneling its books into 115 offshore tax havens....By transferring profits out of the country, Bank of America has shown negative income tax rates since 2008, meaning they do not pay any taxes at all. Not only have they not paid any tax, they’ve gotten tax REFUNDS 3 years in a row.

Washington’s proposed budget for the coming year sends a clear message: The wrath of budget cuts will fall upon the shoulders of hard-working Americans. But there IS an alternative: Make corporate tax avoiders pay.