Five thousand Teamsters strong are just setting out on the March for Jobs from the Staples Center to Pershing Square. We're told the crowd of union members, students and community activists is huge. Right now the Teamsters are shouting "Hoffa, Hoffa," "Three Ninety Six (local 396)" and "Teamsters, Teamsters."

They will stop along the way at companies that attack their own workers: the Luxe Hotel, T-Mobile, Ralph's and J.P. Morgan/Chase bank. 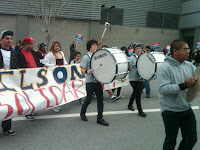 Earlier, several busloads of Southern Cal Teamsters arrived for a 10 am rally. Elvis Costello's "Pump It Up" played at the stage next to Staples Center. Drums pulsated as the cheering crowd built up its energy by the minute. 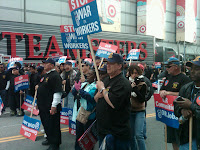 beautiful day just got more beautiful. people marching down past the shop from the teamsters temple to stand for workers + peace.

@LALabor tweets that Mahlon Mitchell, president of the Wisconsin Fire Fighters Association, has been spotted.

Meanwhile, our brothers and sisters in London are wrapping up their massive demonstration. We liked the tweet from @jpilmanic,