We can't keep our own dangerous drivers off the roads 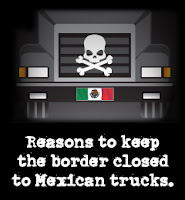 So how will we ever keep dangerous Mexican truck drivers off our highways?

One dangerous American driver, Ophadell Williams, recently crashed a World Wide Travel bus in the Bronx, killing 15 people. Investigators found his license had been suspended, he had many traffic violations and he'd been charged with giving police an alias, according to the NY Daily News.

New York Sen. Chuck Schumer said the state should review the licenses of all tour bus drivers before they get behind the wheel. The Daily News reported


On Friday, state transportation investigators issued 54 criminal summonses and had eight buses towed during a spot check of 14 motor coaches in Manhattan.

So....eight out of 14 random motor coaches had to be suspended because they weren't safe to drive? It's a good thing they were towed. But you know what will happen. Memories of the accident will fade, and oversight of traffic safety will go back to the way it was. Or maybe worse, since New York State has severe budget problems.

So why on earth would we add to the burden of already strapped state transportation officials by asking them to keep track of Mexican truck drivers? In the 19 years since NAFTA started to shaft American workers, U.S. states have not been able to consistently keep records of Mexican drivers' traffic records.  Those records are suspect anyway, because, shall we say, Mexican police are occupied with other problems. Like a raging drug war.

The U.S. Department of Transportation will soon publish a proposal to open the border to Mexican trucks. Teamsters can comment on that proposal. Ophadell Williams is just one of many, many reasons to cite when telling DOT exactly what you think of their plan.
Posted by Teamster Power at 8:59 AM