10 WOW rallies in OH on Tues 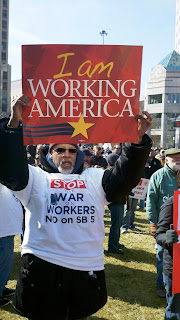 With a population of 44,000, a lot of them Republicans, Strongsville, Ohio might be the last place one would find a rally. But, even the cold and the rain didn’t stop Teamsters from joining 2,000 people fighting SB 5, a bill that strips government workers of their collective bargaining rights. The bill passed the Senate and is expected to pass the House. Gov. John Kasich will certainly sign it. Then, there's a possibility that citizens could veto the bill in a referendum.


We keep plugging away. We keep fighting, no matter what.

We don’t think we can stop the bill, but we’re not going to stop being a thorn in the side of these politicians who support it. We’re letting them know that they are going to be held accountable for their actions.

The Strongsville rally was just one of nearly 10 to take place in Ohio yesterday—and Teamsters led the way at every one.

Crow and many others are already looking forward to the elections in 2012 and 2014, when they will lead efforts to remove corporate-backed politicians from office. Until then, Crow encourages Teamsters everywhere to continue to stand for what is right and what is fair.


Teamsters and all working people need to be on guard. If one state falters, I think we could see a domino effect.