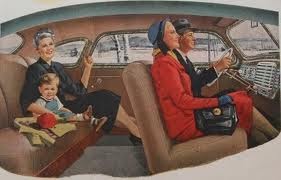 It's official. The American middle class is dead.

Too Much, a commentary on excess and inequality, concluded from Ad Age's white paper that,


The American middle class ... has essentially become irrelevant. In a deeply unequal America, if you don’t make $200,000, you don’t matter.

The top 10 percent of American households are responsible for half of all consumer spending, and a lot of that consumer spend comes from the top of the top, the white paper showed. Says Ad Age's David Hirschman,


...a small plutocracy of wealthy elites drives a larger and larger share of total consumer spending and has outsize purchasing influence — particularly in categories such as technology, financial services, travel, automotive, apparel, and personal care...

By the way, this phenomenon of the rich getting richer and the rest of us working harder for less is getting played out in another arena: the Republican attempt to kill Medicare.

The Roosevelt Institute astutely notices that the Republicans identified the fault line where the middle class began its long decline: 1974. The extremists who wanted to pull the plug on Medicare thought they could do it by pitting the older generation against the younger:


To senior citizens at town hall meetings angry or worried about their plan to convert Medicare to a private insurance scheme, Republicans have a simple answer: It’s not about you. You’ll be fine. This is for “the next generation."


...household incomes, which had been rising since World War II, flattened. Real wages started to stagnate. The poverty rate stopped falling. Health insurance coverage stopped rising. Those trends have continued ever since...


...inequality began its sharp rise, and the share of national income going to the bottom 40 percent began to fall. Productivity and wages, which had tended to keep pace, began to diverge, meaning that workers began seeing little of the benefits of their own productivity gains. The number of jobs in manufacturing peaked and began to drop sharply. Defined benefit pensions, which provide a secure base of income in retirement, began to give way to 401(k)s and similar schemes that depend on the worker to save and the stock market to perform...

The Roosevelt Institute expects Republicans to fail, at least in the latest Medicare controversy. But it makes an assumption that Ad Age does not: that the middle class still matters.
Posted by Teamster Power at 5:05 PM