Why is Rick Scott unpopular? 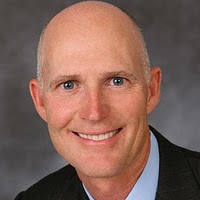 Time Magazine, in its slide toward total irrelevence, wonders why Floridians have soured on their new governor, Rick Scott.


Are they simply taking out their anger at the recession – the state’s unemployment rate still sits at almost 11% – on whomever’s sitting in the Governor’s mansion? Is it because, as Scott’s office insisted in a recent statement, he “wasn’t elected to be most popular” but to make “tough decisions” on slashing state spending, including an almost 8% cut in education? Or could it be that Floridians are feeling buyer’s remorse – that they fear Scott is ultimately more interested in serving the Tea Party’s government-eradication agenda than he is in serving them?

Perhaps Time Magazine hasn't noticed, but working and middle class families don't enjoy having their standard of living lowered by the people they elected.

Prison privatization is just one example of the havoc that Rick Scott has wreaked on Florida.


Gov. Rick Scott plans to put every Department of Corrections facility in the 18 counties of Southern Florida on the market, producing a windfall for the GEO Group, which has contributed more than $1 million to the Florida GOP. If GEO Group does what it has done in other states, potentially more than 5,000 experienced and qualified state corrections officers may find themselves replaced by unskilled, low-wage workers. Scott can claim that he is reducing costs, but experience demonstrates that any savings are short-lived. In the end, the costs will be higher for Florida’s taxpayers, as the private companies demand more taxpayer funds to boost their profits to pay their stockholders and fund lucrative salaries for their CEOs and top managers.