If we can't arrest a guy for murder in Mexico, how can we enforce truck safety? 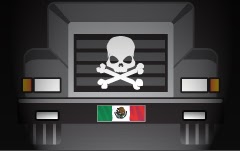 A man believed to have murdered an accounting professor is taunting El Paso police from across the border in Mexico.


Police will not discuss specifics of their case against Landeros, other than to confirm they were able to obtain a DNA sample from him this year when he traveled to Texas.

They later obtained a warrant charging him with first-degree murder. Marcum’s body was found in the lower level of her home Oct. 25. An autopsy showed blunt force trauma and asphyxiation.

Montgomery County police have sought help from Interpol and authorities in Mexico to locate Landeros and bring him to the United States, said Officer Janelle Smith, a police spokeswoman.

“There is a process to be followed. That process takes time,” Smith said.

Let's get this straight. We can't arrest someone who lives just over the border for murder. But we're going to start another pilot program allowing dangerous Mexican trucks to travel our highways freely.

What's wrong with this picture?
Posted by Teamster Power at 10:40 AM