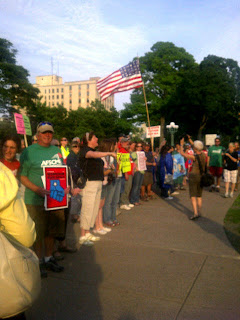 The Wisconsin Supreme Court upheld Koch whore Gov. Scott Walker's anti-worker bill in a 4-3 ruling today, sending a message that the governor and the Legislature can do whatever they want, whenever they want.

Teamsters rushed to Madison to demonstrate against the court's partisan ruling.  The 17-day Walkerville protest of the Republican budget proposal -- a tent city -- is already in progress. The crowd is estimated at 7,000 people.

Brothers Steve Nelson, Randy Monroe and Darrick Jordan from Local 200 were there, and Brother Nelson sent us photos.(We're having some technical problems so will have to share them tomorrow.)

There are as many as 7,000 people in Madison, making it clear that the court's ruling will not silence the millions of Wisconsinites who are appalled by Walker's anti-worker agenda, his addiction to corporate money and his insistence on putting the wealthy ahead of the working.


Massive Protest Expected in the Face of Wisconsin's "Extraordinary Session":


7000 hand in hand surround the Capitol singing we shall overcome


Protesters are joining arms and have surrounded the Capitol, shouting slogans.


There's lots of people at the capitol. Come on out and show your disapproval of what Walker is doing to Wisconsin.


Over 100 days of protest, Walker has to bolt 1st floor windows shut to keep order. Midwest folk don't react this way over nothing.

Posted by Teamster Power at 9:32 PM