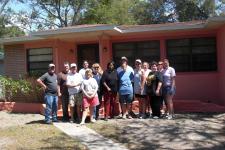 We paint houses for low-income people. For free.

Jo Simon got the ball rolling after she opened her gas bill at her home in Clearwater, Fla. The bill included a flier seeking low-income people who needed their houses painted. Simon, head of the Teamsters Local 79 women’s committee and a 17-year UPS Teamster, called to find out how she could help.

TeamsterMagazine reports that Simon ended up gathering a team of 21 Teamsters to help paint a disabled elderly woman's home. The project was part of  the annual "Paint Your Heart Out Clearwater" event, which resulted in 20 low-income people's houses being painted in one day.


Teamsters from as far as Tennessee came to help out. Kelly Andrews, a member of Local 528 in Atlanta and coordinator for the Local 519-sponsored women’s committee, took vacation time and traveled 10 ½ hours from the Chattanooga, Tenn. area. Andrews brought along fellow Teamster women, Sandy Gilliam and Kelly Sims, as well as her 16-year-old son, Sam. Teamsters from Local 79 in Tampa, Fla., Local 528 in Atlanta and Local 519 in Knoxville, Tenn., participated in the project.

“There are a lot of charities that you can make donations to, but you don’t get to see the people that you helped. It uplifted all of our spirits to be a part of this and to see the positive impact we had on such a wonderful woman,” Andrews said.