Ruh-roh: 1st recall petition to be filed against WI Dem 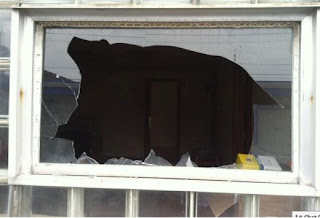 Here's the bad news: WisPolitics.com reports that 21,000 signatures will be filed tomorrow to demand a recall election for Wisconsin state Sen. Jim Holperin, one of the Fab 14 Democrats who fled the state to prevent a vote on Koch whore Gov. Scott Walker's insane anti-worker budget.

Talking Points Memo tells us Holperin is one of the most vulnerable Democrats, as his district voted 57.4 percent to 40.8 percent for Scott Walker in 2010.

Here's the good news: TPM tells us in 2008 it voted 52.7 percent to 45.7 percent for Barack Obama. And Walker's popularity has tanked.

Here's the strange news: A group that wants to recall our Teamster brother Dave Hansen, another one of the Fab 14, claims its office was broken into and recall petitions were stolen. They said it happened on the night of April 15 or morning of April 16. The deadline for submitting recall petitions for Hansen is April 26. In other words, it's getting down to the wire.

The recall office posted a photo of a broken window with shards of glass along the bottom of the sill. The window is four feet off the ground.  The Democratic Party of Brown County called for an investigation, saying,