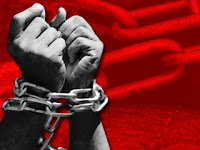 This is just lovely. Hundreds of Indian shipyard workers and Thai farm laborers were brought to the U.S. and enslaved by their "employers," according to the federal government.


A federal agency has sued over unequal treatment of more than 500 workers from India recruited to work at shipyards in Mississippi and Texas and over 200 Thai farm laborers brought to Hawaii and Washington state, officials said on Wednesday.
The U.S. Equal Employment Opportunity Commission contends the workers were forced to live in substandard housing and exploited with fees, to the point where some had net earnings of nearly nothing.

The EEOC said the treatment of the Thai and Indian workers amounted to human trafficking, even though they were brought to the country with work visas.

"Human trafficking" is another way to say "slavery."

The Thai workers were enslaved by a Beverly Hills-based company called "Global Horizons," according to EEOC.  Here's what Global Horizons says about itself:


"...it was the first company to establish a new and improved labor-recruiting, labor-providing business model to meet the temporary and permanent needs of employers worldwide..." (what about about 17th century European slave traders?)

Last year the head of the company, Mordecai Orian, was arrested and criminally charged with forced labor conspiracy. The government says he brought as many as 400 Thai laborers to work on six farms in Hawaii and two in Washington between 2003-07. They had to pay recruitment fees of up to $25,000 and were charged for food and lodging, which left many of them with no money. Their passports were confiscated. They were forced to live in crowded, rat-infested conditions and were threatened with deportation if they complained.

Global Signaling LLC brought the Indian workers to its shipyards in Pascagoula, Miss., and the Port Arthur/Orange area in Texas.

Global Signaling's CEO is Dick Marler. He smiles out from his picture on the website, next to a message tha says,


Signal’s corporate mission statement mandates safety first, superior customer service and quality products. Beginning with my office and carrying through all levels of our company, we honor our commitments to our customers and we conduct business in an ethical manner. These core values are taken very seriously by all employees.

This is what the government says in its lawsuit charging the company with trafficking:

Signal had recruited the employees to work as welders, pipefitters, and ship fitters in Mississippi and Texas. Signal had recruited, tested and offered employment to each employee pursuant to the federal government’s H-2B guest worker program.

On the bright side, we could have full employment if everyone worked for free.
Posted by Teamster Power at 11:27 AM