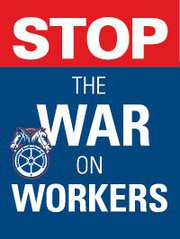 Never a dull moment in Wisconsin politics these days. One senator is challenging petitions for recall, SLOBS are rallying to recall another, and Sarah Palin is making up shit in Madison in front of the Koch brothers' little army.

Sen. Dan Hanky-Kapanke, the first of the eight Republican senators in Wisconsin to face recall, has challenged the petitions. Hanky-Kapanke inspired the fastest recall filing for a senator in Wisconsin history.

Hanky-Kapanke's lawyers are claiming a required registration form wasn't filed with the paperwork and challenged more than 900 signatures. There are 22,975 voters who signed the recall petition on Hanky-Kapanke, out of the only 15,588 signatures required to trigger a recall.  The LaCrosse Tribune reports:

"There's nothing here. There's no merit to the challenge," he said. "For all the money that this guy has, you'd think he could get better lawyers."

You'll recall Dan Kapanke is nicknamed "Hanky-Kapanke" because, well, he's sleazy. Last year he admitted he funneled money from a nonprofit foundation to pay for lights for the minor league baseball team he owns. Hanky-Kapanke was identified as the Republican most vulnerable to recall. Signature gatherers completed the petitions ahead of schedule -- and with more than enough votes to trigger a recall election.


"Dan should simply stand for election and not hide behind legal maneuvering. Let his constituents decide if they support him."

Recall organizers have five days to file a rebuttal, after which Kapanke will have two days to respond. Election officials will have 14 days to approve or reject the petition.

Already, Sen. randy Randy Hopper has had recall petitions against him filed. More recall filings are expected soon for several of the remaining six senators who voted to end collective bargaining rights for workers. Find out how to recall your Wisconsin senator here.

And don't forget, there are 260 days until Koch whore Gov. Scott Walker is eligible for recall. (We can't wait.)

Meanwhile, today a SLOBs (Supporting Labor Over Billionaires) rally was held in Saukville, Wis., in support of efforts to recall Sen. Glenn Grothman.


At Recall for Glenn Grothman. Great crowd of non-slobs!!!

Sen. Grothman infamously referred to the nurses, teachers, fire fighters and other workers rallying at the Statehouse in Madison this way:


"We can no longer continue to have all these slobs in the building."

Finally, a rally is taking place in Madison today. It's sponsored by the Koch brothers-funded Americans for Prosperity (aka, the Tea Party). Tea Party mama, Sarah Palin, is there in all her shrillness, telling followers Koch whore Gov. Walker "isn't trying to hurt union members."

Say what? He's not just hurting union members, he's destroying Wisconsin's middle class. He's proposing budget cuts that kill 20,000 government jobs; another 9,900 private sector jobs will be lost due to the reduced economic activity. He pulled the plug on a high-speed rail project that took 15,000 jobs along with it. And he's proposing restrictions on wind energy that already deep-sixed a wind farm in Green Bay.

But back to Palin. For some reason, Bruce Springsteen's "Born in the U.S.A." is blaring in the background.

Frequently mistaken as a patriotic tune, the song is actually about a war veteran who comes home....