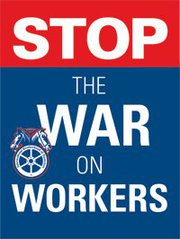 The race to repeal SB5 is on today at noon, and  Teamsters are in the thick of it.

Almost as soon as the ink is dry on the petitions, thousands of Ohioans will set out to collect signatures on them. A total of 231,149 valid signatures in at least 44 of the state’s 88 counties must be collected in 90 days to put SB5 on the ballot on November. (If you haven't been following, SB5 is the unfair attack on employee rights and worker safety.)

Union members and their allies have been training signature gatherers all over the state. Teamsters Local 436 in Valley View trained 63 Teamsters in one night.

"It went real good," said Brother Fred Crow. Apparently there's a lot to know. "Make sure there are no mistakes," Crow said. "Make sure the signers are registered voters. And if a Teabagger gives you a hard time, smile and act like it's funny."

Local 436 is in Cuyahoga County, where the bulk of the petitions will be signed. Teamsters plan to collect a lot of them.

"We got the best team," Crow said. "We're a little cockier, a little angrier and we've got a little more of an edge."

For information on the repeal effort, go to We Are Ohio's website.
Posted by Teamster Power at 9:29 AM