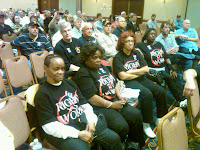 Hundreds of Teamsters spent the morning lobbying their representatives to fight anti-worker legislation in Missouri. The Teamsters are gathered this afternoon with Teamsters General President Jim Hoffa and International Vice President Ken Hall to hear from their elected leaders, including:
Hoffa told the crowd, “Missouri electeds knew the Teamsters were here today. We’re standing up for the middle class and good jobs.”


@cathysherwin tweets: Congressman Carnahan at Teamsters rally in #MO "people are watching this over-reaching, this war on workers."


Nixon told the crowd the anti-worker legislation that is being passed in other states can’t and won’t happen in Missouri. He’s talking about job growth, funding for school transportation and the need for high-speed rail growth—passenger and freight.

Nixon has said he would veto right-to-work (for LESS) legislation if it were to reach his desk.
Posted by Teamster Power at 5:07 PM