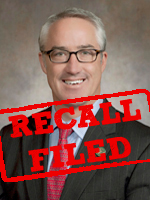 That's what you'll hear if you call the number listed on randy Sen. Randy Hopper's quarterly newsletter to constitutents.

Hopper, the second Wisconsin Republican senator to face recall, listed his office number as 1-888-736-8729. That directs callers to 1-800-475-TALK, where you can have a conversation with "students, housewives and working girls."

Constituents are likely to get more answers from the working girls at the other end of the line than randy Randy. Ever since constituents learned that he's living outside of his district with his 26-year-old mistress, he hasn't done much talking to his constituents.

At one listening session, Hopper told 200 constituents that he wouldn't answer any questions from them. Then he cancelled his listening sessions. He wouldn't march in the St. Patrick's Day Parade because of "security reasons," but we suspect it had to do more with the revelation that his mistress had gotten a cushy state job with a salary 35 percent higher than her predecessor.

The chat line story was too good for Wisconsin's Democratic Party Chairman Mike Tate to lay off of. He said,